Another informed and informative piece from Donald Marron on tough budgetary conflicts between Congressional Democrats and Republicans that appear likely to re-emerge before year-end. Marron directs the Urban-Brookings Tax Policy Center, and formerly was the acting director of the Congressional Budget Office.
Posted by Jon Shayne at 12:54 PM

Robert Rodriguez, of First Pacific Advisors in Los Angeles, is one of those guys with a talent for spotting downside possibilities early. He has released a recent talk, titled "Caution: Danger Ahead." In a nutshell he is saying that the recent relatively good times we are having, as we emerge from the funk of 2008 and 2009, represent remission rather than cure of financial disease.

I pass this along not exactly to endorse the viewpoint, because I think there is more than one possible outcome here. What I like is that Rodriguez is worrying intelligently.

Let me put this another way: if policymakers were as worried as Rodriguez is, then the sovereign debt problems he is concerned about, and he includes the U.S. in his sovereign worries, would not come to fruition. But they are not, so there is a chance they will.

One of several reasons I take Rodriguez seriously is a prescient speech, titled "Absence of Fear," that he gave before the CFA Society of Chicago in June, 2007. The section titled "Securitization Contamination" is impressive.

I love guys like this. From what I read of him, he has a personality like that of Richard Feynman, the physicist. Frank in the extreme, and more comfortable than most in calling things as he sees them, regardless of how little company he may have in doing so. That type of personality is valuable to society, and all too rare.
Posted by Jon Shayne at 9:39 PM

The life of a typical money manager or financier does not appeal to me. The late Walter Schloss, on the other hand, is someone whose life appeals to me a lot. He died this weekend at age 95. Bloomberg has a nice piece out today, remembering  him. Warren Buffett once joked that Schloss beat the S&P 500 since before there was an S&P 500. As you'll see from the article, that appears to be the case. In a profile he wrote of Schloss, John Train wrote that Schloss's office in New York was unglamorous in the extreme, and overlooked an air shaft. Schloss would not visit a company he invested in unless it was within walking distance of his office. I also recall Train describing the phone on Schloss's desk that sat, "unringing," during their multi-hour interview. All of this seemed to help, not hurt, the results he got for his investors.

ADDENDUM: Actually, now that I check my files, I see that my memory of who wrote the old profile of Schloss was wrong. The profile, while worthy of Train, was in Fortune in 1995, and is by Terence Pare. The title is "Yes, You Can Beat the Market." I hate the title, which is too glib, but it's a very good article. Googling around, I see that some folks have uploaded it to the web, probably without permission. It is worth reading for the information on Schloss and some other great investors. Also, The Economist has a great obit on Schloss, too (HT Ted).
Posted by Jon Shayne at 1:51 PM

On the Validity of the Shiller P/E

Yesterday, I posted some information on the 10-year, inflation-adjusted price/earnings ratio of the U.S. stock market. Here is the best, quick way to get a sense of how valid, or invalid, the 10-year inflation-adjusted P/E ratio. Bottom line: it looks pretty valid as an indicator of future returns. Plenty of noise, but some signal in there, too.

You can also get similar statistics in a book by Robert Shiller, Irrational Exuberance.  (Go to figure 10.2 in the 2005 paperback edition.) Shiller looks ahead to how the predictor worked over the next 10 years. In contrast, the 2008 article I linked to above, by Christopher D. Carroll, uses a slightly longer period, 12 years, on the theory that it is the smallest common multiple of the Congressional and Presidential election cycles.

POSTSCRIPT:  I found a graph of Shiller's future return data online, in a 2001 paper, "Valuation Ratios and the Long-Run Stock Market Outlook: An Update," which he co-wrote with John Y. Campbell. It is as this link, and the most useful part would be the bottom panel of figure 6.
Posted by Jon Shayne at 4:08 PM

Here is a graph we do in my office of the Shiller 10-year normalized price/earnings ratio. Remember that this is an aggregate valuation; there is a lot of variation within the market. But stocks are not cheap. (That doesn't mean they won't beat bonds over the next decade.) You'll need to click on the image to get a good look. 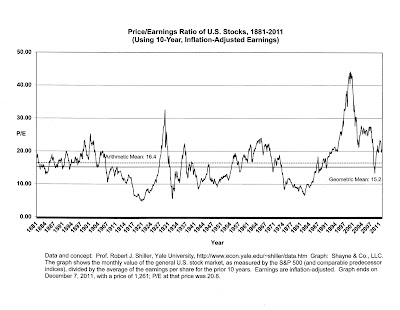 And here's Robert Shiller  himself, talking about the data series, bringing the numbers to life. Note that the date of the Shiller interview is from Sept. 27 of last year, when the S&P 500 closed at 1,175. It closed today at 1,351.

To be clear, this is my own graph, not his, but we use his numbers.
Posted by Jon Shayne at 5:31 PM

Soccer is More Interesting than Stocks

Fascinating to see an ECB working paper reporting that trading declines by about half when an important international soccer match is on TV, at least in a country whose team is playing. And the correlation between that country's markets and other world markets drops as well.

Which reminds me of the old joke that Dan May, a 20th century Nashville industrialist, used to tell.  A surveyor called him and asked, "Mr. May, how many people work at your factory?" He thought for a moment and replied, "About half."

The more serious academic point, which the ECB paper (I have only glanced at it) touches on, and which Robert Shiller has mentioned, is that attention is a scarce resource.
Posted by Jon Shayne at 5:16 PM

Recently, I looked again at Robert Rubin's 2003 book, In an Uncertain World. I remember recommending it to friends when it came out. My goal now, as I glanced at passages I had underlined years ago, was to see how the meaning had changed since the Great Unpleasantness of 2007-to-present. I was also wondering how Rubin, a guy who wrote so intelligently on how to think about risk, could have missed the big problems that developed while he was at Citigroup.

One passage amazes me. In it, Rubin raises a red flag about Jon Corzine's risk appetite, years before l'affaire MF Global. Quoting the book (and remember, this was 2003):


...The list of firms and individuals who have gone broke by failing to focus on remote risks is a long one. Even people who think probabilistically, and are highly analytical and systematic, often dismiss remote contingencies as irrelevant.

In this regard, I often think of an example from Goldman Sachs when Jon Corzine, then the firm's exceedingly successful head of fixed-income activities, wanted to take a large position in farm credit bonds. The expectation was of a high return, and because the bonds were backed by the "moral obligation" of the U.S. government through a new agency known as Farmer Mac, the probability of their defaulting seemed close to zero. But what Steve Friedman and I asked Jon was "What if a problem develops in farm credit and as extremely unlikely as it might be, the government declines to stand by its so-called moral obligation?"

"That's silly," Corzine replied. It was inconceivable to him that the government would not honor its moral obligation, and in a sense he was right.

But Steve and I didn't want Goldman Sachs to cease to exist after 130 years because something that we agreed was virtually inconceivable actually happened....Too often, risks that seem remote are treated as essentially nonexistent. In this case, the remote contingency never occurred, but the decision to limit the risk was right.

The passage I just quoted is on pages 342-343 of the paperback edition of In an Uncertain World. I added the bolding. Upshot for me? Rubin was bugged enough by this encounter with Corzine to put it in print. Note the bold text where Rubin says the he "often think[s]" of this episode. It really got to him.

It was politic of Rubin to admit that the risk (Farmer Mac default) never actually materialized. I guess that is how one becomes a Robert Rubin. Yet he does, in the end, make clear his view that the decision to overrule Jon Corzine was right. Which, of course, it was.

We have now seen, with the bankruptcy of MF Global, a certain vindication of Rubin's instinct that this episode at Goldman was disturbing and worth recording.
Posted by Jon Shayne at 9:12 PM

In the Financial Times (registration required), Gillian Tett on the Libor probe and other trouble that lives on in the dank, dark recesses of the financial world. She is one of the smartest, most effective, and most principled financial reporters out there right now.

In Fortune, Warren Buffett on bonds, stocks, and gold.

Any piece of investment writing that can work in a little Hindu philosophy is worth noting. "Life - and Death Proposition" is the latest monthly newsletter from Bill Gross of Pimco. I guess he sees deleverage and austerity as karma for the bubble. I can't disagree. A delight to see such a philosophical piece from a guy who manages hundreds of billions of dollars. Hope that the flame of intellectual life sometimes flickers reasonably brightly, even on the trading floor.
Posted by Jon Shayne at 5:26 PM

Good discussion of the increasingly optimistic tone in the U.S. economy by Greg Ip, at the blog of The Economist. He keys off of today's strong jobs report. I think he's more or less right here. My only quibble is that Europe is OK for now because of heavy intervention by the European Central Bank, but it's not actually healthy (the banks there need more capital). And I remain a little concerned with how far the U.S. economy is from an equilibrium state, with the equilibrium bringing, when it comes, higher taxes and higher interest rates. Still, though, he's right that things are improving and gives a balanced reading of the data and trends.
Posted by Jon Shayne at 4:57 PM

Nice quote this week from derivatives expert Satyajit Das, in the Financial Times:  "For the moment, policymakers are relying on the advice of actress Tallulah Bankhead: 'Cocaine isn't habit forming. I should know - I've been using it for years.' But reliance on low interest rates, like all addictions, is dangerous. It is also ineffective in addressing the real economic issues."

The full column by Das, "Low rates: the drug we can all do without," is here, but the link requires registration.

Hmmm...I see that this is my third post in the past several days that likens central bank policy to a drug. And it is the second involving a celebrity who is partaking (Elvis was the other star, in a cartoon I posted). Odd.
Posted by Jon Shayne at 9:11 PM