Should We be Concerned...

...that anarchy has become super-sexy?

Well, personally, I don't know. But if it weren't, why would Axe body spray name a new fragrance after it?
Posted by Jon Shayne at 4:13 PM

I would like to get some words painted over the entrance to my office: "Let no one enter who is ignorant of geometry."

This was the inscription over the entrance to Plato's Academy. Today it would be more about algebra than geometry, but the point is clear enough.
Posted by Jon Shayne at 11:35 PM

My Favorite Quote about Banking

"There are more banks than bankers."

Brilliant. This observation comes from the king of over-the-counter bank stock market makers, Morris Schapiro, who died at age 93 in 1996. I know little about Schapiro, but loved him instantly when I heard this quote. I was, therefore, delighted to spot his name on a dormitory some years ago at Columbia University. Apparently, Marty Sosnoff likes the quote, too.
Posted by Jon Shayne at 6:34 PM

Likewise, we should not be relying nearly as much on central banking as we are, when we need fundamental reform. Mainly, we need to shrink the size of the financial sector and give the biggest banks an incentive to break themselves up. Capital requirements should increase steeply with size.

Such were the thoughts that ran through my mind as I ordered, a little self-righteously, a tasty Indian Spice soy milk hot chocolate, after lunch, at Whole Foods.
Posted by Jon Shayne at 1:57 PM 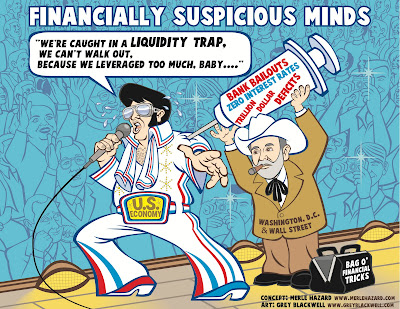 Click on the cartoon to see it bigger and better.

This is a new cartoon conceived by me that nutty financial country singer, Merle Hazard. The very talented artist and illustrator Grey Blackwell drew it.

The original Elvis song is here. A little history of it is here at Wikipedia, and the earlier, non-hit version by the songwriter Mark James, is here.

A pattern: policymakers in Europe and the U.S. do not make hard decisions unless the markets force them to do it. A crashing stock or bond market really gets their attention and forces them to make political compromises and act.

The plot continues: once the officials act, markets rally. Now, if the markets knew the policy response in advance, there would not be a crash to begin with. So there never really needs to be a crash, does there? But, on the other hand, if markets didn't crash, then policymakers would never act. So then, yeah, there does need to be a crash, even though it will be followed by a recovery.

I am, of course, over-simplifying massively and almost comically. For one thing, there are problems too big for any economic policy response to patch over (e.g. a big war, or, here's a depressing thought, a famine that wipes out a significant part of a country's population). And there is a mix of things making securities prices change, with sheer randomness being among them. My hypothesized cycle is only one of the things going on.

Still, the crash-response cycle is, I suspect, a part of the mix. It seems too dilute to have direct usefulness for investing, but I find it interesting intellectually. It may be good to be aware of simply for the purpose of keeping one's self from getting caught up in the emotional swings.
Posted by Jon Shayne at 6:17 PM

"[G]ood regulation should take account of our rather extreme ignorance. That means emphasizing the more general protections, as embodied in a ready supply of safe liquid assets, rather than obsessing over the regulatory micromanagement of particular bank activities."

European banks have written credit default swaps on their host government's bonds. It looks like American banks are counterparties to a significant degree: "Overall, U.S. banks may hold two-thirds of the total euro-debt CDS outstanding," according to the article. The U.S. positions are probably largely hedges, but still, even hedged exposure can be devastating, if your counterparty fails when you were counting on them to offset a loss somewhere else in the portfolio.

"French Bank BNP Paribas has sold $4 billion in protection on French government debt, 12% of the global total," the article continues. "Similarly, Italy's Banca Monte dei Paschi di Siena has sold $3 billion worth of protection on Italian government debt. If Italy, say, defaults on its debt, these banks might not be able to pay their American trading partners. 'It's the ultimate moral-hazard trade,' says Peter Tchir, CEO of hedge fund TF Market Advisors. 'If a country defaults on its debts, these European banks domiciled in the same country will also default on their debts and won't pay out, so why not write the protection now and make lots of money?'"

It's logical for the banks to write these contracts, whether or not they expect to make money on them in the long run. After all, the highly-leveraged banks of Europe will generally not be solvent no matter what they do, if their host countries default on their own debt.
Posted by Jon Shayne at 9:26 AM

The best lack all conviction, while the worst
Are full of passionate intensity.

...when you are already there?

Per this CR post, teenage kids today are not as interested in driving cars as my friends and I were in the 1970s. The virtual world seems to be eating up the real world, to some degree. My anecdotal observations match what CR says.

Obviously, the weak economy and restricted licenses, which the post touches on, are part of it...but not all.
Posted by Jon Shayne at 5:11 PM

The New Normal, and the Para-Normal

The multi-decade, debt-financed party is over, or at least, in a very different phase. Obviously the natural tendency from here is deleveraging and deflation, but because of that, central banks are printing a lot of money. So we have two possibilities: deflation caused by the "real" economy, and, at the other end of the bimodal distribution, inflation caused by the response of central bankers (if the medicine works, and the dose is too big, inflation will be the result of the otherwise-deflationary illness).